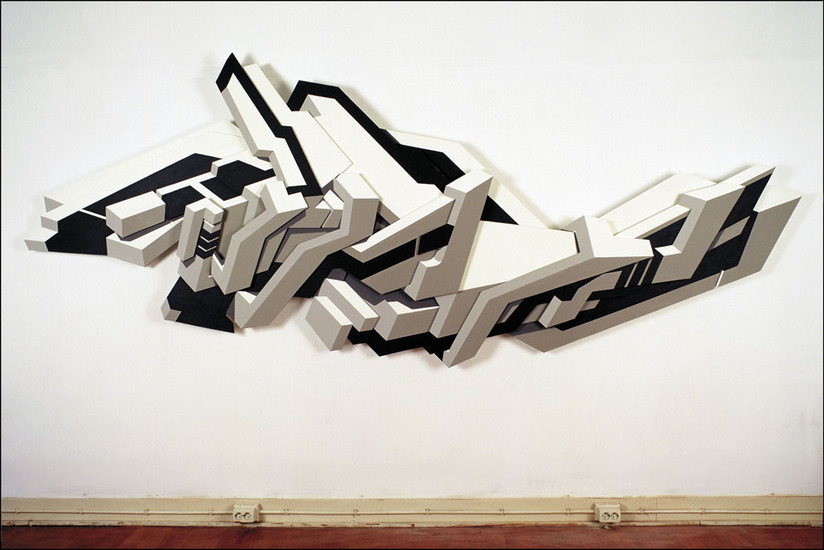 The Dutch artist, Boris Tellegen, has his roots in street art where he discovered a unique way of portraying multi dimensional geometrical forms. Having moved away from streets to his airy and inspirational studio in the Veem building in Amsterdam, he experiments with a variety of media, ranging from paper to Styrofoam and wood. He creates multilayered structures that invite the audience to come close, discovering new layers within the artwork. Rarely are we invited to see within a structure, but Tellegen shares the heart of his sculptures with his audience. His works remind us of the geometrical configurations of Kazimir Malevich, to which he adds texture and dimension. Architectural designs that come to life when viewed from various angles – Tellegen creates perfect symmetry with the most diverse materials.

For the kunstRAUM exhibition he shall be using 3 wall structures that have been used in 4 previous exhibitions, each time taking a new shape adapted to the exhibition space. Currently on show at the Muziekgebouw aan het IJ, Amsterdam, they will be transformed into a completely new structure for kunstraum.ch. Tellegen is inspired by the space and the environment around it, before building the final work. As the structure progresses he adds on new materials and adapts the colours to the surroundings, therefore changing the impression of the space itself. By making the work site-specific he naturally creates a dialogue between the actual building and the artwork. The geometric structure of the kunstraum.ch is reflected in the design of the artwork and allows the audience to observe the space in a new light.

The Swiss artist, Reto Steiner, is inspired by the natural forms found throughout the environment of his hometown, Frutigen. Surrounded by mountains and natural rock formations he creates organic structures with modern media. All is not what it seems when observing his works. His rock and crystal formations made from plaster are often so realistic one has to come close to recognize that they are man made. He will close passageways making his audience take new ways, where they may have not gone before. The audience is invited to look onto new parts of the institution, which they may have previously ignored. Just as boulders may block passages in real life he imitates nature in the most unlikely locations.

For the kunstRAUM exhibition he will make use of the garden around the exhibition space. The covered terrace will become part of his work. The audience will only see glimpses of the powerful structure from inside kunstraum.ch, until they make their way outside and are invited to discover the true grandeur of the work. Materials that seem flat to us are given dimension and meaning through his complex constructions.

Too often the institution is used as a sheer white space to merely display works of art. For his exhibition we want to show that a space may also be integrated into a work. Architectural design in combination with contemporary art creates a logical entity that allows the audience to discover exhibition space and artists alike. As an introductory exhibition this was an essential matter for kunstraum.ch.